Chat with us, powered by LiveChat

Tampa reinvents itself to show off its shores 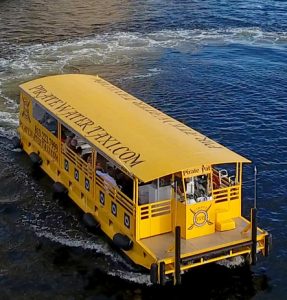 Back at our hotel about an hour later, we’re just in time to see a Pirate Water Taxi boat docking across the street. Our first time aboard, we agree we should have ridden sooner.

Though it’s nearly Halloween, the pirate theme is a clear spinoff of Gasparilla, an annual bash during which hundreds of thousands of locals and others dress up as pirates (and wenches) and eat, drink and be merry. Cooked up by some local bigwigs around 1904 as a way to spice up the city’s annual May Day celebration, Gasparilla stuck. Though the famed pirate for which the festival is named, Jose Gaspar, is fictional, a real pirate ship named after Tampa’s patron rogue leads a waterborne “invasion” of the city early every year, accompanied by New Orleans Mardi Gras-style street parades.

Up the river we tootle, our pirate-garbed captain pointing out landmarks along the way.

The trip upstream feels as much a journey into Tampa’s industrial past as through its present and future. On the east bank sits a half-razed stubby office building where soon the city’s tallest building — 50-plus-story Riverwalk Place condo towers — will rise.

Just ahead on the opposite bank, we spy the silvery Russian-style minarets of the University of Tampa, once the city’s first luxury hotel. Built by railroad and hotel magnate Henry Plant, the resort helped put a late-19th-century town of only about 15,000 souls on the map when some of Teddy Roosevelt’s Rough Riders bunked there before heading off to Cuba and into the history books. Today, the idyllic grounds are a favorite spot for students and locals to stroll and lounge.

The river and its banks are packed with people. The sight of paddleboarders still seems a little disconcerting on a river that until the 1980s was among the country’s most polluted waterways. It’s not unusual these days to see bottlenose dolphins in the river.

It’s not until we pass the Tampa Museum of Art and the Straz Center for the Performing Arts and slide under Laurel Street Bridge that I remember I’ve been here on the water before, during a nighttime fishing trip years ago. Beneath this old drawbridge, a friend recently told me, lives a colony of bats, whose dusk-time departure his young children love to see.